This IBM® Redbooks® Solution Guide describes a set of highly anticipated features for the IBM PowerVM® Virtual I/O Server V2.2.3, which are applicable to small and medium businesses and to large enterprises alike. The features include new management and performance tuning software for PowerVM solutions and new enterprise features for high-end IBM Power Systems™ servers. Scalability, reliability, and performance enhancements are also introduced with the latest versions of the Virtual I /O Server (VIOS) and the IBM Hardware Management Console (HMC).

This Solution Guide describes the PowerVM products and features that can improve performance in several environment configurations. Figure 1, for example, shows the design overview of a shared storage pool (SSP) configuration, in which IBM Power Virtualization Performance™ (PowerVP™) and the Virtual I/O Server Performance Advisor find bottlenecks and provide configuration advice . The Virtual I/O Server enhancements include the best SSP implementation yet, as described in this Solution Guide.

This IBM® Redbooks® Solution Guide describes a set of highly anticipated features for the IBM PowerVM® Virtual I/O Server V2.2.3, which are applicable to small, medium, and large corporations. The features include management and performance tuning software for PowerVM and enterprise features for high-end IBM Power Systems™ servers. Scalability, reliability, and performance enhancements are included with the Virtual I/O Server (VIOS) and the IBM Hardware Management Console (HMC). 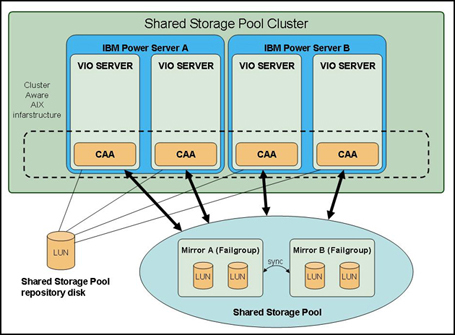 PowerVM is continually enhanced to incorporate what IBM clients expect for an enterprise-class virtualization solution. These new features deliver increased business value for IBM Power Systems clients and include the following items:

Each of the new functions and products is described in detail in this Solution Guide.

The new capabilities of PowerVM include improvements and product functions for the IBM Power Systems family of servers and for PowerVM virtualization technologies.

IBM PowerVC can help simplify the management of your Power Systems virtual resources. After the product code is laid out, the no-menu interface of the IBM PowerVC guides you through three simple configuration steps to register physical hosts, storage providers, and network resources to start capturing and intelligently deploying your virtual machines (VMs).

This product is powered by the open source OpenStack software from the OpenStack Foundation. OpenStack is software that controls large pools of server, storage, and networking resources throughout a data center. IBM PowerVC and OpenStack work in concert to lead your data center toward higher efficiencies.

IBM PowerVP for Power Systems offers a performance view in to a PowerVM virtualized environment running on IBM Power Systems Firmware V7.7 or later. IBM PowerVP can show which virtual workloads are using specific physical resources on an IBM Power Systems server. You can then make configuration changes so that your system can capitalize on your most valued efficiencies.

IBM PowerVP helps reduce the time and complexity in finding performance bottlenecks by using a simple dashboard that shows system performance health. It can help simplify both prevention and troubleshooting tasks, thus reducing the cost of performance management.

The following figure shows a partial view of the IBM PowerVP dashboard for an IBM Power 795. Notice the slight processing activity on cores 0 and 7 from processor module number 2. Other components of the dashboard include a recording section that captures primary system activities for further analysis.

The following figure shows a partial view of the main IBM Power Enterprise Pools management window, which is part of the HMC interface. From this window, you can monitor and manage your servers that are in pools and create pools.

IBM Power IFL uses the following aspects for clients who want to consolidate Linux workloads on the IBM POWER® architecture:

The following figure shows the simplification of the offering that is introduced with IBM Power IFL. 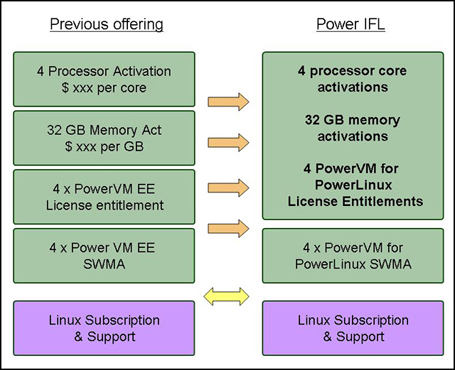 The Virtual I/O Server (VIOS) is enhanced with flexibility, scalability, and resiliency features in the following areas:

The following figure shows an example of a simplified SEA configuration. 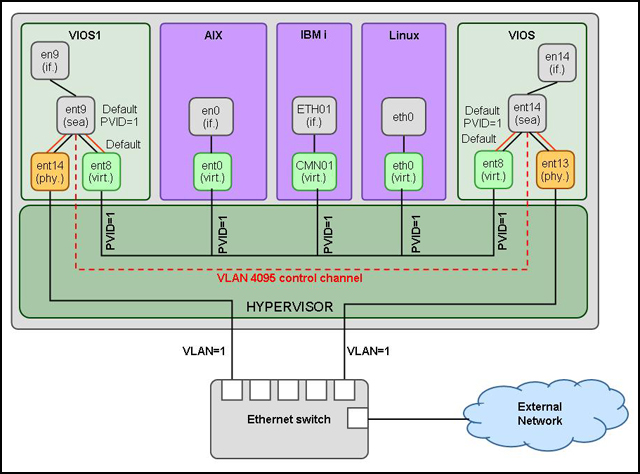 Here are the types of advisory reports that are generated by the Virtual I/O Server Performance Advisor tool:

The report is similar to the one that is shown in the following figure, where you can see that the Virtual I/O Server Performance Advisor provides suggested values for better performance. In this partial view of the window, the VIOS - Processor section shows a suggested value for the variable capacity weight.

With the release HMC V7.8, the HMC includes the following new functions:

Limitations and prerequisites for HMC

The following list shows the minimum requirements and prerequisites to update the HMC and work with the new enhancements:

HMC can be used to perform the following functions:

IBM PowerVC manages PowerVM through a set of application programming interfaces (APIs) that interact with the HMC. These APIs provide the necessary instructions to the HMC to manage the IBM Power Systems hardware, the IBM Power Hypervisor, and the Virtual I/O Server.

The technologies that are introduced in this Solution Guide are part of the architecture of several other IBM products and solution offerings:

This section presents an ordering example using IBM Configurator for e-business, commonly called e-config, which is available at the following website:

The scenario is defined as follows:

The following tables show the fulfillment orders that meet this configuration scenario.

Several IBM product and solution offerings integrate PowerVM technologies into their foundation. Here are a few of them:

For more information about other products that can integrate with PowerVM technologies, contact your local IBM representative, or visit Server virtualization with IBM PowerVM at the following website:

Here are the supported platforms, which include several products running PowerVM solutions:

For more information about other products that can integrate with PowerVM technologies, contact your local IBM representative, or visit Server virtualization with IBM PowerVM at the following website: