Mainframe Modernization and Skills: The Myth and the Reality 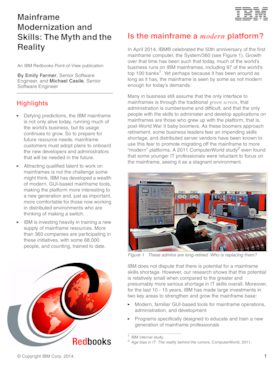 In April 2014, IBM® celebrated the 50th anniversary of the first mainframe computer, the System/360. Growth over that time has been such that today, much of the world's business runs on IBM mainframes, including 97 of the world's top 100 banks. Yet perhaps because it has been around as long as it has, the mainframe is seen by some as not modern enough for today's demands.

Defying predictions, the IBM mainframe is not only alive today, running much of the world's business, but its usage continues to grow. So to prepare for future resource needs, mainframe customers must adopt plans to onboard the new developers and administrators that will be needed in the future.

Attracting qualified talent to work on mainframes is not the challenge some might think. IBM has developed a wealth of modern, GUI-based mainframe tools,

making the platform more interesting to a new generation and, just as important, more comfortable for those now working in distributed environments

who are thinking of making a switch.

IBM is investing heavily in training a new supply of mainframe resources. More than 360 companies are participating in these initiatives, with some 68,000

people, and counting, trained to date.

Is the mainframe a modern platform?

Are you planning for the future?

What’s next: How IBM is helping