Figure 1 shows a solution that uses Tivoli Storage Manager to back up to and restore data from the self-contained disk storage in the TS7620 Deduplication Appliance Express. The TS7620 is configured for FSI-NFS, which emulates UNIX file system behavior and presents a virtualized hierarchy of file systems directories and files to UNIX-based clients using NFS protocol. The ProtecTIER Manager graphical user interface (GUI) is used to monitor the TS7620 Deduplication Express. With ProtecTIER Version 3.3, this GUI can be used to upgrade the ProtecTIER system to new code levels. 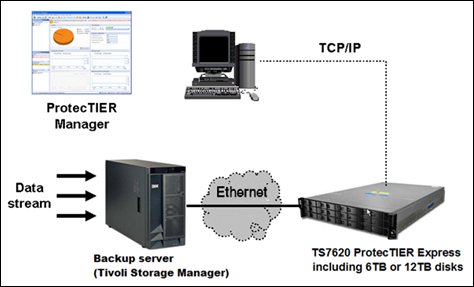 Using data deduplication, you can reduce the amount of space that is required to store data on disk. With deduplication, repeated instances of identical data are identified and stored in a single instance. This process saves storage capacity and bandwidth. Data deduplication can provide greater data reduction than previous technologies, such as Lempel-Ziv (LZ) compression and differencing, which is used for differential backups.

Depending on your configuration, this solution can provide some or all of the following benefits:
This solution enables you to take advantage of HyperFactor® technology, which uses a pattern algorithm that can reduce the amount of space required for storage of the backup environment by a factor of up to 25 times, based on evidence from existing implementations. The effect and result of HyperFactor processing is a factoring ratio., The factoring ratio is the ratio of nominal data (as a sum of all user data backup streams) to the occupied physical storage in the ProtecTIER repository. For example, a 10:1 ratio means that 10 times more nominal data is being managed than the physical space required to store it. Also, the 10:1 ratio means a 90% storage savings. The effectiveness of data deduplication depends on many variables, including the rate of data change, the number of backups, and the data retention period.

Figure 2 shows the relationship between HyperFactor processing and the possible storage savings. 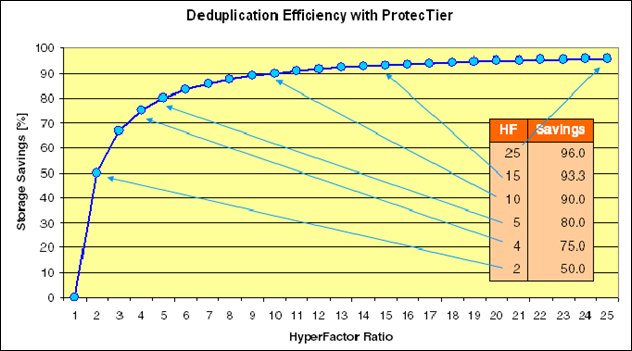 A ProtecTIER system is configured to use FSI for deduplication and backup. The ProtecTIER system presents itself as a network-attached storage (NAS) backup target that is capable of using the HyperFactor algorithm and ProtecTIER native replication bandwidth reduction techniques for storing and replicating deduplicated data to make backup and WAN vaulting more cost effective. FSI enables backup servers that are running backup applications to connect over IP networks to ProtecTIER, without requiring Fibre Channel connectivity. 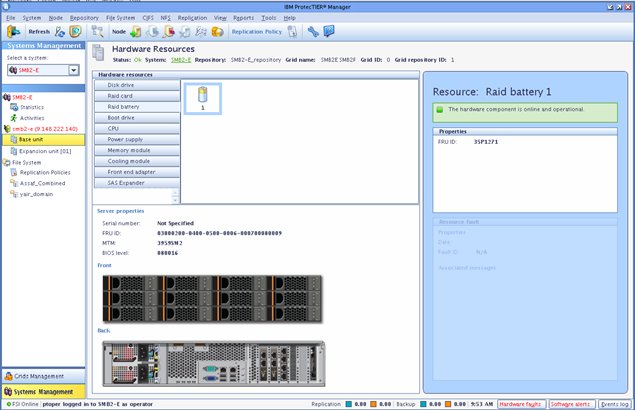 This solution uses a TS7620 Appliance as a deduplication server for FSI backup targets. The ProtecTIER TS7620 Deduplication Appliance runs Tivoli® Storage Manager as a backup application solution. If FSI-CIFS is installed, FSI-NFS can be installed on the same system. Any directory that is written or created as CIFS can be exported as an NFS mount point, and vice versa.

The TS7620 Appliance system is a stand-alone configuration (with one node), and up to two expansion units. It uses one server to transfer data from the backup server to the TS7620 internal storage.

This use case consists of a very simple environment running on a Linux or UNIX system. It has a Tivoli Storage Manager Server attached to three Tivoli Storage Clients, which perform backups and restores to the IBM Storage TS7620 Deduplication Appliance Express (TS7620 Appliance) configured as an FSI-NFS environment. There are no physical cartridges. 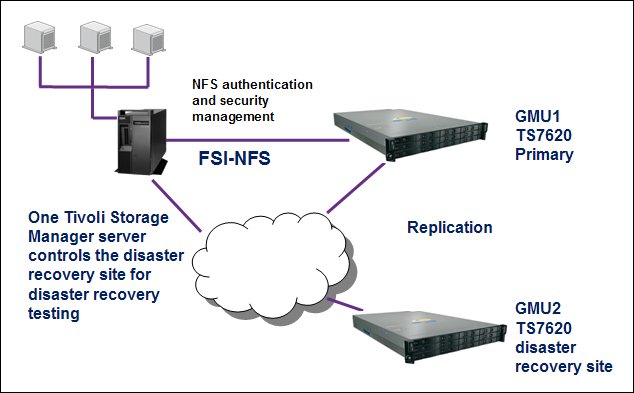 The ProtecTIER Manager (PT Manager) application is a graphical user interface (GUI) that you use to view, configure, manage, upgrade, and troubleshoot the operation of the IBM TS7600 ProtecTIER family of products. The workstation for the installation of the PT Manager is not included in the ProtecTIER system.

The IBM ProtecTIER Manager software can be installed on x86 hardware that is running one of the following 32- or 64-bit operating systems:

Table 1 shows the program numbers for the IBM products that are used in this solution.

Table 1. Ordering part numbers and feature codes
A TS7620 base unit with 6 TB capacity can be upgraded to a 12 TB model with a software upgrade. No additional hardware is required. For additional capacity upgrades, up to two 3959-EXP expansion units can be added.