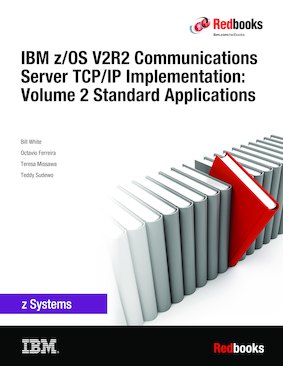 For more than 50 years, IBM® mainframes have supported an extraordinary portion of the world's computing work, providing centralized corporate databases and mission-critical enterprise-wide applications. IBM System z®, the latest generation of the IBM distinguished family of mainframe systems, has come a long way from its IBM System/360 heritage. Likewise, its IBM z/OS® operating system is far superior to its predecessors in providing, among many other capabilities, world-class and state-of-the-art support for the TCP/IP Internet Protocol suite.

TCP/IP is a large and evolving collection of communication protocols that are managed by the Internet Engineering Task Force (IETF), an open, volunteer organization. Because of its openness, the TCP/IP protocol suite has become the foundation for the set of technologies that form the basis of the Internet. The convergence of IBM mainframe capabilities with Internet technology, connectivity, and standards (particularly TCP/IP) is dramatically changing the face of information technology and driving requirements for even more secure, scalable, and highly available mainframe TCP/IP implementations.