IBM i and IBM Storwize Family: A Practical Guide to Usage Scenarios 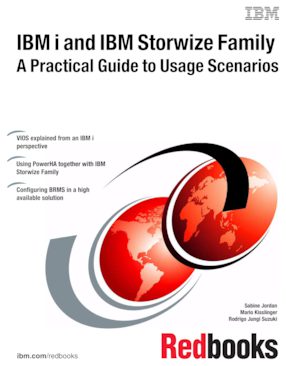 This IBM Redbooks® publication gives a broad overview of the IBM Storwize® family products and their features and functions. It describes the setup that is required on the storage side and describes and positions the different options for attaching IBM Storwize family products to an IBM i environment. Basic setup and configuration of a VIO server specifically for the needs of an IBM i environment is also described.

In addition, different configuration options for a combined setup of IBM PowerHA® SystemMirror® for i and the Storwize family products are described and positioned against each other. Detailed examples are provided for the setup process that is required for these environments.

The information that is provided in this book is useful for clients, IBM Business Partners, and IBM service professionals who need to understand how to install and configure their IBM i environment with attachment to the Storwize family products.

Chapter 1. Introduction to IBM Storwize Family for IBM i

Appendix A. PowerHA Tools IBM i