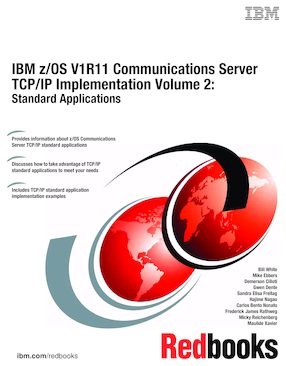 For more than 40 years, IBM® mainframes have supported an extraordinary portion of the world's computing work, providing centralized corporate databases and mission-critical enterprise-wide applications. The IBM System z®, the latest generation of the IBM distinguished family of mainframe systems, has come a long way from its IBM System/360 heritage. Likewise, its IBM z/OS® operating system is far superior to its predecessors, providing, among many other capabilities, world-class, state-of-the-art, support for the TCP/IP Internet protocol suite.

TCP/IP is a large and evolving collection of communication protocols managed by the Internet Engineering Task Force (IETF), an open, volunteer, organization. Because of its openness, the TCP/IP protocol suite has become the foundation for the set of technologies that form the basis of the Internet. The convergence of IBM mainframe capabilities with Internet technology, connectivity, and standards (particularly TCP/IP) is dramatically changing the face of information technology and driving requirements for ever more secure, scalable, and highly available mainframe TCP/IP implementations.

For more specific information about z/OS Communications Server standard applications, high availability, and security, refer to the other volumes in the series:

For comprehensive descriptions of the individual parameters for setting up and using the functions that we describe in this book, along with step-by-step checklists and supporting examples, refer to the following publications:

This book does not duplicate the information in those publications. Instead, it complements them with practical implementation scenarios that can be useful in your environment. To determine at what level a specific function was introduced, refer to z/OS Communications Server: New Function Summary, GC31-8771. For complete details, we encourage you to review the documents referred to in the additional resources section at the end of each chapter.