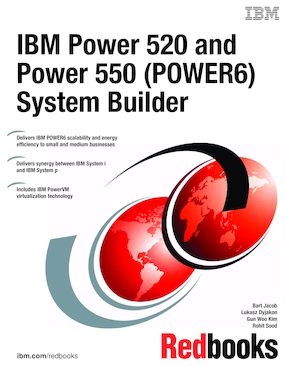 In 2008, the IBM® System i® and IBM System p® platforms unified the value of their servers into a single, powerful lineup of servers based on industry-leading POWER6™ processor technology with support for the IBM AIX® , IBM i (formerly known as i5/OS® ), and Linux® operating systems. This new, single portfolio of IBM Power Systems™ servers offers industry-leading technology, continued IBM innovation, and the flexibility to deploy the operating system that your business requires—all in the small and medium business environment.

This IBM Redbooks® publication covers the POWER6 520 and 550 unified models 8203-E4A and 8204-E8A as of May 2009. It is intended for professionals who want to acquire a better understanding of IBM Power Systems products, including:

This book provides a large set of features, including hardware-focused processor, memory, and I/O support feature descriptions supported by the POWER6 Power 520 and Power 550 servers consolidated into a single document.

Chapter 1. Introduction to the IBM Power 520 and Power 550 servers