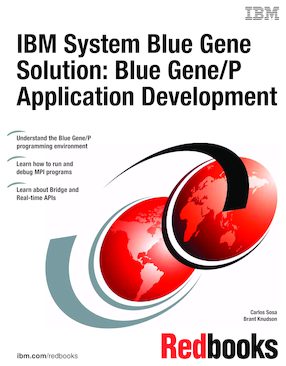 This IBM® Redbooks® publication is one in a series of IBM books written specifically for the IBM System Blue Gene/P Solution. The Blue Gene/P system is the second generation of a massively parallel supercomputer from IBM in the IBM System Blue Gene Solution series. In this book, we provide an overview of the application development environment for the Blue Gene/P system. We intend to help programmers understand the requirements to develop applications on this high-performance massively parallel supercomputer.

In this book, we explain instances where the Blue Gene/P system is unique in its programming environment. We also attempt to look at the differences between the IBM System Blue Gene/L Solution and the Blue Gene/P Solution. In this book, we do not delve into great depth about the technologies that are commonly used in the supercomputing industry, such as Message Passing Interface (MPI) and Open Multi-Processing (OpenMP), nor do we try to teach parallel programming. References are provided in those instances for you to find more information if necessary.

Appendix B. Files on architectural features

Appendix H. Use of GNU profiling tool on Blue Gene/P

Appendix I. Statement of completion