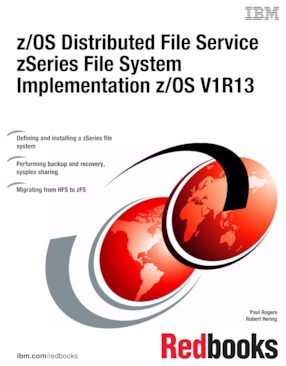 The z/OS® Distributed File Service zSeries® File System (zFS) is a z/OS UNIX® file system that can be used like the Hierarchical File System (HFS). zFS file systems contain files and directories, including Access Control Lists (ACLs), that can be accessed with the z/OS HFS application programming interfaces (APIs).

zFS file systems can be mounted into the z/OS UNIX hierarchy along with other local or remote file system types (for example, HFS, TFS, AUTOMNT, NFS, and so on). zFS does not replace HFS, but it is the z/OS UNIX strategic file system and IBM® recommends migrating HFS file systems to zFS. Beginning with z/OS V1R7, there are no restrictions for file system structures that should be kept as HFS instead of zFS.

This IBM Redbooks® publication helps you to install, tailor, and configure new zFS file systems. This information can be used by system administrators who work with the zFS component of the IBM z/OS Distributed File Service base element.