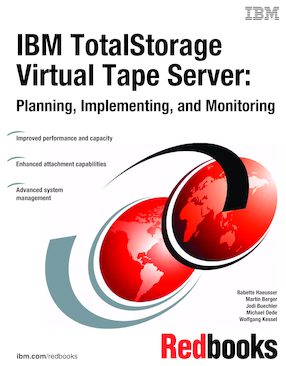 This IBM Redbooks publication is the seventh update (eighth edition) to the best-selling IBM Magstar VTS Implementation Guide, which was first published in 1997. Since the first VTS installations in May 1997, much has changed in the Virtual Tape Server area. The performance, capacity, and functionality of the VTS has been phenomenally enhanced. The focus of this book is to provide implementation and usage guidance for the latest changes to the IBM TotalStorage Enterprise Automated Tape Library VTS models B10 and B20. Minor additions and corrections have also been applied throughout the book. If you discuss, sell, order, or plan for a Virtual Tape Server, please consult this book first!

The VTS introduced the virtual concept into tape subsystems, similar to virtual storage and virtual disk concepts that already have been implemented. The latest changes allow IBM 3592 Tape Drives to attach to the VTS installed with an IBM 3584 Tape Library, thus enhancing the VTS attachment options and performance once again.

Appendix H. Using a VTS on a DFSMS host without a tape management system