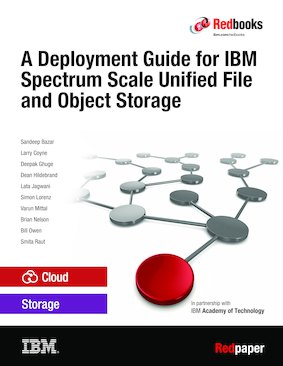 Because of the explosion of unstructured data that is generated by individuals and organizations, a new storage paradigm that is called object storage has been developed. Object storage stores data in a flat namespace that scales to trillions of objects. The design of object storage also simplifies how users access data, supporting new types of applications and allowing users to access data by using various methods, including mobile devices and web applications. Data distribution and management are also simplified, allowing greater collaboration across the globe.

OpenStack Swift is an emerging open source object storage software platform that is widely used for cloud storage. IBM® Spectrum Scale, which is based on IBM General Parallel File System (IBM GPFS™) technology, is a high-performance and proven product that is used to store data for thousands of mission-critical commercial installations worldwide. Throughout this IBM Redpaper™ publication, IBM Spectrum™ Scale is used to refer to GPFS. The examples in this paper are based on IBM Spectrum Scale™ V4.2.2.

This paper provides instructions about setting up and configuring IBM Spectrum Scale Object Storage that is based on OpenStack Swift. It also provides an initial set of preferred practices that ensure optimal performance and reliability. This paper is intended for administrators who are familiar with IBM Spectrum Scale and OpenStack Swift components.