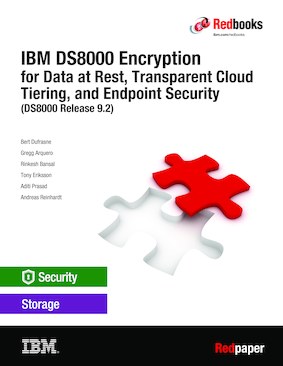 The IBM® DS8000® supports encryption-capable drives. They are used with key management services (local or external) to allow encryption for data at rest. The use of encryption technology involves several considerations that are critical for you to understand to maintain the security and accessibility of encrypted data.

This edition of this IBM Redpaper™ publication focuses on IBM Security™ Guardium Key Lifecycle Manager with the DS8000 Release 9.2 code or later and updated DS GUI for encryption functions.

Important: Failure to follow the requirements that are described in this publication can result in an encryption deadlock.

The DS8900F also provides Fibre Channel Endpoint Security when communicating with an IBM z15™, which supports link authentication and the encryption of data that is in-flight.