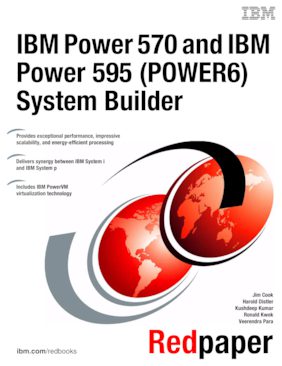 IBM® System i® and IBM System p® platforms unify the value of their servers into a single, powerful lineup of servers based on industry-leading POWER6™ processor technology with support for the IBM AIX®, IBM i (formerly known as i5/OS®), and Linux® operating systems. This new, single portfolio of IBM Power Systems™ servers offers industry-leading technology, continued IBM innovation, and the flexibility to deploy the operating system that your business requires.

This IBM Redpaper™ publication is intended for professionals who want to acquire a better understanding of IBM Power Systems products, including:

This paper provides hardware-focused processor, memory, and I/O feature descriptions that are supported by the POWER6 Power 570 and Power 595 servers. The goal of this paper is to ensure that customers with IBM System i and IBM System p experience understand the POWER6 capabilities on these servers with a focus on hardware technology and features starting with this single comprehensive paper that covers the following IBM Power 570 and IBM Power 595 Machine Type and Models (MTMs):

A companion paper will available for the POWER6 520 and 550 MTMs (IBM Power 520 and Power 550 (POWER6) System Builder, REDP-4412). Available now are the following POWER6 technical overview and introduction papers:

This paper does not replace the latest marketing materials, tools, and other IBM publications that are available. For complete documentation, refer to the IBM Systems Hardware Information Center:

This paper is based upon the current set of IBM Power Systems documentation that is available in various IBM publications and IBM Power Systems Web sites. However, it also provides significant additional information--all in one document. When appropriate, this paper points to these other sources for more detailed or more frequently updated information.

Common POWER6 capabilities that we address in this paper include:

We also include summaries of AIX and IBM i operating system capabilities and associated licensed program products that are available.