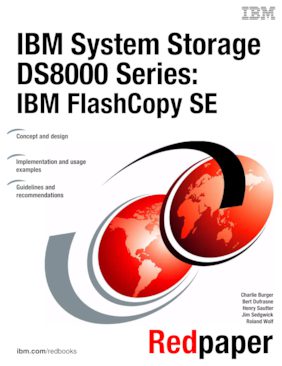 In October 2007, IBM® announced a space efficient FlashCopy® capability for the DS8000™ platform. We call this new function IBM FlashCopy SE. It is a licensed function of the DS8000 family. It does not replace, but rather complements the standard FlashCopy function.

In this Redpaper, we start with a general overview of FlashCopy SE, where we discuss its concepts and intended usage. We summarize the concepts of the standard FlashCopy function and review its different options in the context of FlashCopy SE. We also have a detailed discussion of the FlashCopy SE design and implementation. As an added benefit, we provide guidance for the definition and usage of FlashCopy SE from both an open system and z/OS® environments and provide illustrations using the DS GUI or DSCLI interfaces.