In today’s mobile era, over 10 billion devices are accessing information. Enterprises are challenged with integrating new mobile services with existing organizational processes, without sacrificing the client’s experience. Approximately 70% of all enterprise transactions involve IBM® z Systems™. This IBM Redbooks® Solution Guide describes how the new IBM z13™ with its enhanced data processing capabilities can play an important role by providing the secure and stable base that you need to extend your existing enterprise data and transactions to mobile users.

In today’s mobile era, over 10 billion devices are accessing information. Enterprises are challenged with integrating new mobile services with existing organizational processes, without sacrificing the client’s experience. Approximately 70% of all enterprise transactions involve IBM® z Systems™. This IBM Redbooks® Solution Guide describes how the new IBM z13™ with its enhanced data processing capabilities can play an important role by providing the secure and stable base that you need to extend your existing enterprise data and transactions to mobile users. Figure 1 depicts a typical environment where access to applications and interaction with the systems is achieved from mobile devices. 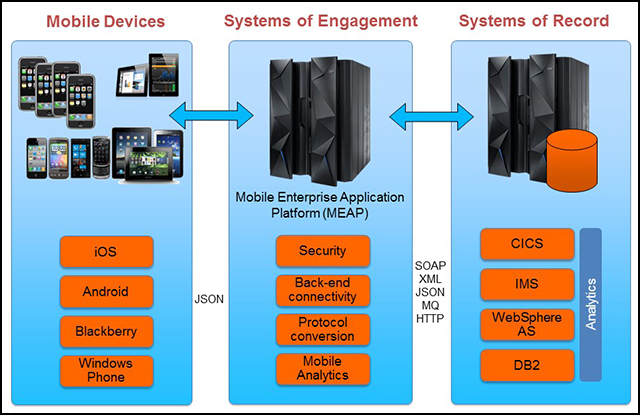 IBM z Systems provide you with enterprise mobility solutions that can scale to handle the huge number of often unpredictable transaction rates and volumes, deliver proven mobile end-to-end integration with reliability, availability, and security, and ensure that your customer data is protected.

IBM provides the tools to satisfy the lifecycle requirements for mobile application development, including, but not limited to these tools:

Business-critical solutions depend on where the source data resides. IBM z Systems deliver a single workload-optimized platform for operations (systems of record and systems of engagement, including mobile applications) and analytics by integrating and managing real-time, historical, and predictive views of data.

Keeping applications and data as close to each other and as secure as possible is a top priority for outperforming organizations, and this requires tight integration with operational data. When data resides on disparate and distant servers, several problems might be encountered:

The main benefits of implementing mobile apps with IBM MobileFirst Platform on z Systems are as follows:

In addition, the following features benefit the development and running of mobile applications on z13:

A typical mobile application environment deployed on z Systems is shown in Figure 2. 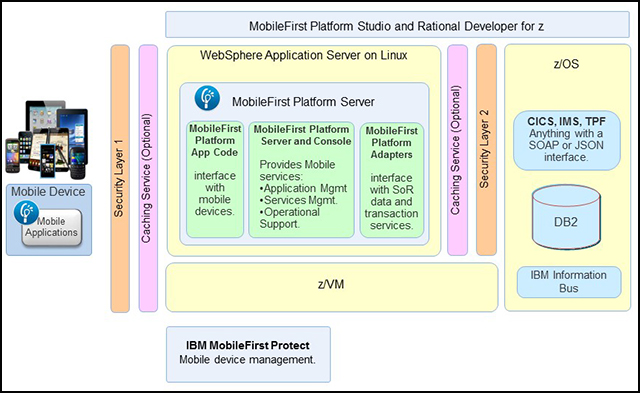 The Mobile Middle Tier adds the following components, which are not present in typical web applications:

Mobile topology choices can be classified as follows:

Mobile application can be deployed with or without these components:

The architecture of an IBM MobileFirst Server solution on z Systems is shown in Figure 3. 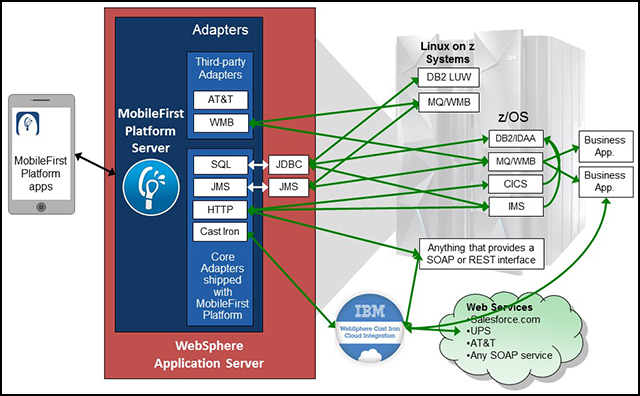 The flexibility of MobileFirst integration functions enables existing web services on z/OS to be integrated into mobile applications. A Mobile Feature Pack in CICS enables the communication by using the lightweight JSON protocol.

For highly scalable and reliable mobile solutions, z Systems can deliver the best platform to host these environments, and with the MobileFirst Application Center, you can build an enterprise app store for mobile apps.

Note: To access DB2 on z/OS, you still need a DB2 Connect license. That is installed in WebSphere Application Server with the JDBC driver.

Assuming that you need your mobile service to be highly reliable, you must be sure to protect against hardware failure, loss of a network, issues with the operating system, and the application server that provides the mobile service. To provide this service, you typically duplicate each of these components and have multiple environments to acquire, operate, and replace after a time. Depending on how important your app is, you might duplicate all of these components again throughout another region. This redundancy is built into the z Systems platform.

An example of an architecture using IBM MobileFirst Platform Server for production is shown in Figure 4. 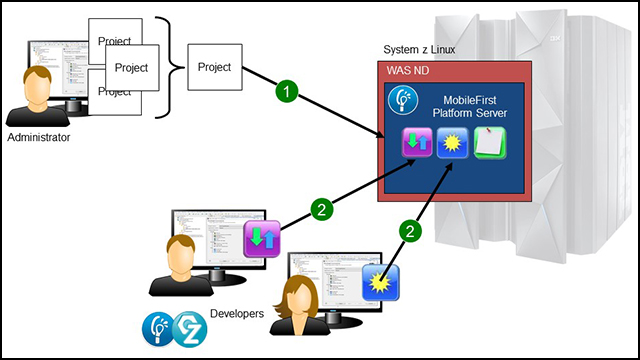 The implementation of a mobile solution on z Systems can provide substantial advantages if you consider an implementation designed for high availability. This capability is because of the share-everything concepts in the design of the z Systems technology, which allows the sharing of processors and network channels, and in case of a failover, the switch to a second logical partition, without doubling the resources or machine capacity. 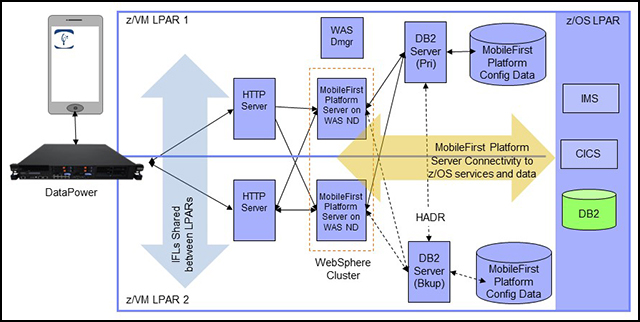 The solution integrates well with IBM technologies and transactional and information services by using IBM MobileFirst adapters for the following items:

This solution guide introduced a conceptual approach to building a MobileFirst deployment strategy with IBM z System at the core of the solution. This solution encompasses too many products and solutions to be listed here for ordering. To find individual product solution details, see the general IBM Offering Information page (announcement letters and sales manuals) at the following website:
http://www.ibm.com/common/ssi/index.wss?request_locale=en

You may also contact your IBM representative for ordering information.