Available with the IBM DB2®10.5 release, BLU Acceleration delivers unparalleled performance improvements for analytic applications and reporting using dynamic in-memory optimized columnar technologies. BLU Acceleration is one of the most significant pieces of technology that has ever been delivered in DB2 and arguably in the database market in general. This IBM® Redbooks® Solution Guide provides an overview of the DB2 with BLU Acceleration feature.

With query response times up to 100 times faster than earlier systems, BLU Acceleration provides a simple, fast, and easy-to-use solution for organizations that seek rapid access to business answers. Armed with this new information, organizations can lower costs and quickly gain an edge on competitors that are slower to draw insight from their data.

Yes, the industry is abuzz with discussion of in-memory columnar data processing. Yet BLU Acceleration offers much more. For example, it delivers significant improvements in database compression but does not require you to have all your data in memory. 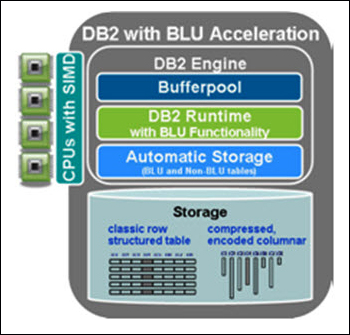 BLU Acceleration from IBM differs from solutions that other vendors offer in that it allows the unified computing of online transaction processing (OLTP) and analytics data inside a single database. This helps remove barriers and speed results for users.

Although the cost of memory continues to fall, data growth is exponential, so analytics systems that require all data to be kept in memory are no longer practical. This is where BLU Acceleration technology enters the picture, delivering in-memory performance even when the need for active data is bigger than the available memory space.

DB2 with BLU Acceleration runs on existing infrastructure, helping to extend the return on investments that the organization has already made. With relatively loose hardware requirements, system configurations can be optimized to meet specific cost targets and service levels. As data volumes increase, the cost of manipulating each piece of the data decreases dramatically.

BLU Acceleration runs on DB2, so it builds upon the business-proven performance, reliability, and security of the platform while adding its own unique memory management and query optimization features.

DB2 is used around the world for online transactional processing (OLTP) and online analytic processing (OLAP) workloads, with decades of high-availability performance and a reputation for flexible scalability, both up and out. DB2 has consistently recorded top results in industry-standard benchmark tests, with multiple 100 TB-and-larger systems in production use every day.

Easy to adopt and use

The real breakthrough in BLU Acceleration is in how easily organizations can adopt the technology. Competing solutions often require migration to new platforms, database software, and business applications, making the transition both costly and resource intensive. But, because BLU Acceleration is integrated into DB2, you can move into it at your own pace.

The move to column-based tables can be accomplished one at a time or all at once. For guidance, DB2 includes tools that help IT personnel assess the impact of using BLU tables in different workloads and analytical environments.

In introducing BLU Acceleration, IBM did not just bolt a new component onto DB2. Support for the new solution already existed within the DB2 engine, so there is no new skill gap for DBAs and developers to overcome.

Simply stated, you need only to install DB2 10.5 on a supported platform and enable a single configuration parameter to tell DB2 that you want to optimize the default settings for analytical workload characteristics. After you create your database, create your tables, and load the needed data using common DB2 tools; your workloads immediately run faster and without the need for SQL syntax or schema changes.

At the center of BLU Acceleration is a column-organized table store combined with actionable compression that operates on a column and page level to save storage space. The column organization eliminates the need for creating and maintaining secondary indexes and aggregates. In DB2 10.5, both column-organized and traditional row-organized tables can coexist in the same database.

DB2 with BLU Acceleration includes several features that work together to make it a significant advancement in technology:

The critical role of the data warehouse is to provide a central repository of structured data that is integrated from one or more sources. It enables a single version, or view, of the business, implemented as a single, scalable, and consolidated data warehouse. The data that is consolidated in the warehouse is available for analysis by all levels of the business. In addition, the warehouse contents can be subdivided into data marts that are specific to particular business units.

To support the workloads of today, the data warehouse architecture must be optimized for both traditional, deep analytic queries and for shorter, transaction-style queries. Figure 5 shows a high-level architecture of an analytics data mart that has been subdivided from a transactional database. Such data marts are created directly from the transactional database for use by lines of business. Because administration of BLU Acceleration is simple, data marts can be created quickly to enable rapid responses to new business requirements. DB2 with BLU Acceleration allows lines of business to run analytic reports in real time to improve their business decisions.

This example demonstrates how DB2 clients are observed to achieve significant performance and storage improvements using BLU Acceleration. The intent is to show what happens when a query is run on a large amount of data.

Assume that we have an analytics environment with the following attributes:

When we run a query to look for sales orders that shipped in December 2013, this is what occurs:

To summarize, BLU Acceleration’s performance and storage improvements make it possible for DB2 to have to process only 42 MB of the original 12 TB of data. This is roughly equal to a few high-quality digital pictures or a couple of social media cell phone apps. And with today’s ultra-fast processors, the results of analyzing 42 MB of data can be returned almost instantly.

As with most IBM solutions, one of the beauties of DB2 with BLU Acceleration is the way it easily integrates with various complimentary solutions and products,

Yet even though Cognos Business Intelligence provides techniques such as Dynamic Cubes to optimize analytics on large amounts of data, an almost unavoidable task is to completely bypass access to the underlying database, such as when the target data might not present in the Dynamic Cubes. The system then must access the required data from the relational database. DB2 with BLU Acceleration complements the Cognos optimizations with its dynamic in-memory column store technologies on the database layer. It is optimized for analytic workloads, providing an efficient data platform for accessing large amounts of data for specific columns when needed.

Learn more about the benefits of combining BLU Acceleration with Power Systems at this address:
http://www.ibmbluhub.com/solutions/blu-power/

DB2 for Linux, UNIX, and Windows (DB2) with BLU Acceleration can be integrated with SAP Business Warehouse (SAP BW) and SAP’s near-line storage solution on DB2.

Table 1. Hardware and platforms suggested for DB2 with BLU Acceleration

More information about ordering DB2 with BLU Acceleration is available at this address:
http://ibm.co/1mkrh87

In addition, potential customers can try DB2 with BLU Acceleration in several ways:

For more information about DB2 with BLU Acceleration, see these IBM Redbooks publications: