The DB2 pureScale system diagram that is shown in Figure 1 describes the migration of disks that include logs and data in to a new physical storage hardware. 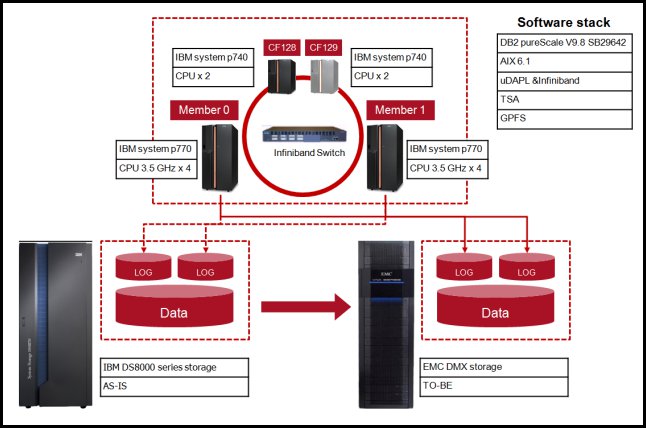 The basic steps are based on the IBM Technote “Changing physical disk storage of GPFS file system" (found at http://www.ibm.com/support/docview.wss?uid=swg21633330). This web doc provides more details that help to answer the following questions:

The following sections describe the steps to take after you attach new EMC storage to DB2 pureScale cluster hosts.

Assume that you have a file system that is named db2data4 that has three 100 GB IBM disks, which are named gpfs229nsd, gpfs230nsd, and gpfs231nsd.

Now, you add three new EMC disks that should use the naming convention gpfsXXXnsd. (In this example, the disks are named gpfs237nsd, gpfs238 nsd, and gpfs239nsd). If you run the db2cluster -cfs -add command, you can add multiple physical volumes at once.

The elapsed time for this command to run in our scenario was 2 minutes and 7 seconds.

You can monitor the status of adding the disks by running the GPFS command /usr/lpp/mmfs/bin/mmdf db2data4. Figure 2 shows that new three disks are being allocated to the file system. 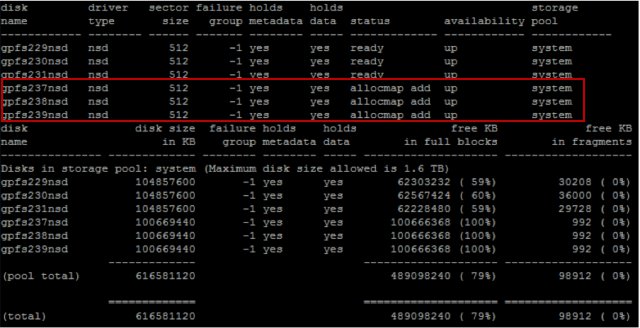 Figure 2. Monitor the addition of disks by running the mmdf command

In similar fashion, you can add new disks to the same or other file systems by running the same command. During the disk map information change, SQL applications running against this file system might be delayed for 5 - 20 seconds temporarily.

After the disks are added to a file system, the data on existing disks should be rebalanced to the new disks.

Automatic GPFS rebalancing might happen, depending on the storage disk vendors that are added. For example, there were four findings during this case scenario test:

No matter what the storage product is, the necessary actions are clear:

After you add the new EMC disks, the new disk status changes to ready and the free size on the disks is 100%, which means these disks are empty and that the GPFS rebalancing did not happen in this case (see Figure 3). 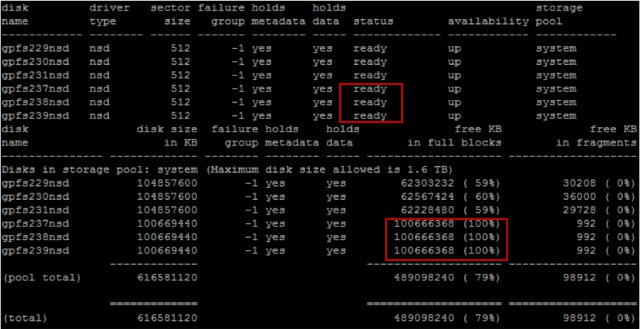 To start the GPFS rebalancing manually, run the following command as root:

You can monitor the rebalancing progress by running mmdf <file system name> and checking the free space on disks.

After you add new EMC disks for GPFS file systems, the next step is removing old IBM disks. When you create a DB2 pureScale cluster, you configure the GPFS tiebreaker disk in the db2fs1 file system unless you change the location manually after you create it.

In this section, the example commands show the removal of three disks from db2data4. All commands should be run as the root user. Run the following commands:

The elapsed time for this command to run in our scenario was 6 minutes and 24 seconds.

The elapsed time for this command to run in our scenario was 4 minutes and 56 seconds.

The elapsed time for this command to run in our scenario was 5 minutes and 46 seconds.

Unlike when you add disk commands, only one disk can be specified with the -remove option, which means that disks can be removed only one at a time in a GPFS file system. To save time, multiple commands can be run against multiple file systems. For example, here are some sample commands running in parallel:


While a disk is being removed, it is shown as being emptied by the output of the mmdf <file system> command. GPFS rebalancing always happens when disks are removed because the data on the disk should be moved on to the remaining disks on the file system (see Figure 4). 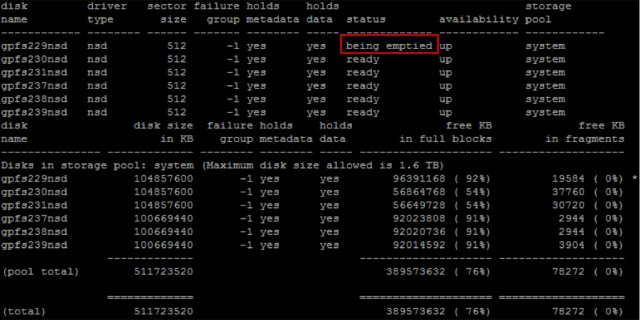 Figure 4. Monitor the progress of removing a disk

Finally, the TSA tiebreaker disk should be changed to a disk from the new EMC storage. This work can be done while the DB2 pureScale cluster is online. In the scenario, a new disk that is named hdisk200 from EMC storage is set as new TSA tiebreaker.