This IBM Analytics Support Wed Doc describes possible hardware component failures on IBM PureData System for Analytics, their effect on the system, and its criticality and consequences if multiple components fail.

This document also describes the architecture of IBM PureData System for Analytics to clarify the relationships between components. It also provides guidance on replacement scenarios. This information is intended to help users correctly respond to failures and open problem management records (PMR) with an accurate level of severity.

This document provides information to help you better understand what is needed to perform a part replacement. By using this information, you can plan ahead without needing more information about requirements from an IBM engineer. This document also helps you to identify the effect of a failure on the system and schedule a replacement.

Overview
This IBM Analytics Support Wed Doc describes possible hardware component failures on IBM PureData System for Analytics, their effect on the system, and its criticality and consequences if multiple components fail.

This document also describes the architecture of IBM PureData System for Analytics to clarify the relationships between components. It also provides guidance on replacement scenarios. This information is intended to help users correctly respond to failures and open problem management records (PMR) with an accurate level of severity.

This document provides information to help you better understand what is needed to perform a part replacement. By using this information, you can plan ahead without needing more information about requirements from an IBM engineer. This document also helps you to identify the effect of a failure on the system and schedule a replacement.

Notes
This document does not apply to the following IBM PureData System for Analytics models:

The IBM PureData System for Analytics N1001 (also known as IBM Netezza TwinFin® ) includes SAS switches, which are not be covered in this document. SAS switches were replaced in later models by a cable that directly connects the SPU to the disk enclosure, which is the only difference between the systems.

Figure 1 shows the components and how critical they are to the system. Each component is described in this document. 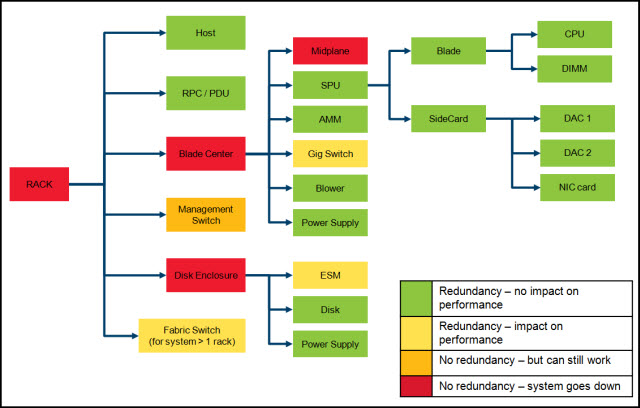 Figure 1. Hardware components and the effect of their failure to the system

The following acronyms are used in Figure 1:

In an N200x/N3001-002 system, 40 dataslices are available and only two SPUs. Therefore, each SPU handles only 20 dataslices. When an SPU fails, the other SPU must manage 40 dataslices and the difference is more significant.

This document describes the following failures:

Disk failure
This type of failure is the most commonly seen failure on your system. How often this failure occurs depends on the use of the database. It is normal to see failures each month or even each week on larger systems that are heavily used. Failure and replacement are done while the database remains online.

It is this issue of one disk being available that is the drawback of parallel systems. Overall performance is only as fast as the slowest component.

The time a regeneration process runs depends on the amount of data it must copy.

The copy time is 60 megabytes per second (MBps) on an idle system and 10 MBps on a system under use. For example, if dataslices hold on average 100 GB of data, it takes approximately 10.000 seconds to copy one dataslice on a system that is used (regeneration speed of 10 MBps). Because two dataslices are on each disk, both dataslices must be copied. The total time that is needed to complete this copy is approximately 20.000 seconds (6 hours).

Disk failures are a concern only if spare disks are unavailable.

The database is paused when a SPU fails, which interrupts any insert queries and select queries. The pause lasts for approximately 20 minutes, but can be longer if the system does not detect any particular error and attempts to power cycle the SPU to restore it to normal operation.

Although there are situations in which a SPU fails and appears to be unresponsive, a power cycle often clears the issue and there is no need for replacements.

When the SPU fails, replacements can be made without any outage on the system. Because the SPU is not used, it can be pulled from the system without affecting any other part of the system.

After the replacement is complete, it takes an outage of approximately 15 minutes to return the SPU to active operation. This outage can be done at any time by running the nzhw rebalance command as user nz. It does not require onsite assistance.

ESM failure
The ESM is a communication and monitoring component. Each disk enclosure includes two ESMs. Its failure does not disable the database because communication is possible through the second ESM. Performance might be affected, depending on which ESM fails.

If performance is degraded, it often is not more than 50%.

Replacing the ESM is an online process and does not require that the database is disabled. No rebalance must be done and after the new ESM is operational, new paths are discovered automatically and used by the system.

The failure does not cause any outages and part replacement is an online process.

Although performance is not affected, the power supply must be replaced because a failure of the second power supply disables the entire database and no processing can be done until the disk enclosure becomes operational.

If two power supplies from the same power domain fail, half of the blades cannot power and the system might fail (or at least run at 50% performance).

A BladeCenter's power supply failure does not cause any outage and its replacement is an online process.

IBM BladeCenter blower failure
There are two blowers that cool the blades in the BladeCenter. If one blower fails, the second blower automatically runs at full power, which is easily heard in the datacenter.

Although the single blower provides enough cooling to sustain system usage, it is important to replace the failed blower quickly. SPUs can overheat, which can result in the database and all of the elements of the SPUs failing.

IBM BladeCenter gig switch failure
The gig switch provides connectivity between the BladeCenter and the hosts. It is the main data transfer backbone between SPUs. Because there are two switches in each BladeCenter, you still have connectivity and the system runs with only one switch working.

The decrease in query execution varies because it does not affect the CPUs and their processing power, only data transfer. In a worst-case scenario, the effect is a decrease in performance of 50%. In reality, you see a less dramatic decrease of performance. For small systems, this decrease might be 0%.

When the switch fails, it might trigger a restart of the database. Replacement requires an outage of approximately three hours.

Management switch failure
This failure is tricky because the system remains online despite the host being unable to communicate with various components, such as RPCs and AMMs. Therefore, the system cannot power cycle SPUs, perform a host failover, or receive confirmations that SPUs completed starting. If the database pauses or stops, it cannot be brought back up until the failed management switch is replaced.

It is critical to replace the switch as soon as possible. Failures of this component are rare, but must be treated with critical attention when they occur.

Host disk failure
The hosts use RAID 10 and include a spare disk. Depending on the model, seven disks are used (three mirror pairs of two and a spare) or five disks (two mirror pairs and a spare). Failure of a single disk is not cause for alarm because the spare disk takes over and RAID 10 is preserved with data mirroring.

Multiple host disk failures can be serious problem. If the system loses both copies of the data, the host fails and must be rebuilt. The rebuilding process requires a 10-hour system outage. Replacing a host disk is an online process.

Host failure
A total host failure can be the result of many issues, such as a motherboard or RAID controller failure.

Whatever the cause, your system is affected only if the issue occurs on the active host. Because the standby host is on standby and database connections are not running through the host, failure does not affect query processing.

If the active host fails, the database is moved from the failed host to the standby host so that processing can resume. However, this move interrupts all processing and database connections. After 15 minutes, the database often is back online and running on the second host, ready to resume running queries.

The outage that is needed to fix a host depends on the components that must be replaced. There is no performance effect on the environment; however, you cannot have a high availability system until the host is repaired. If the last remaining host is lost, all of the data that is associated with that host also is lost.

Rack power supply failure
When we describe a rack power supply failure, we are referring to each rack. Each rack features its own independent power from other racks. The one exception is N3001/N200x-002 models, whose racks are referred to as a quarter rack. These racks require less power and are powered by two long RPCs that are directly connected to the datacenter's power. One RPC represents the rack's left side power and the other the right-side power.

The following types of power supplies provide power to the entire rack:

Power supplies fail rarely. A failure often is the result of a problem with a breaker or a loose power cable.

Each RPC supplies power to the disk enclosures, management switch, and hosts. Replacing an RPC or PDU requires a two-hour system outage.

Failure cheat sheet
The types of failures and their effect on the system are listed in Table 1.

PureData for Analytics N1001 systems are slightly different because they use SAS switches, which are not covered in this document.