This IBM® Redbooks® Solution Guide describes how to take advantage of the strengths of IBM PE Developers Edition for HPC applications and solve customer challenges and maximize system throughput, performance, and management. This Solution Guide examines the tools, utilities, documentation, and other resources that are available to help IBM technical teams provide solutions and support for IBM HPC solutions in an IBM hardware environment.

IBM® PE Developer Edition provides an Eclipse-based development environment that allows developers to edit, compile, run, and debug applications all from within the framework. It also includes a set of performance tools that helps the developer analyze the performance of an application. IBM PE Developer Edition provides an integrated development environment (IDE) that combines open source tools, and IBM developed tools to fulfill the following requirements:

The client workbench is built upon the Eclipse platform and provides a set of tools to improve the productivity of high performance and technical computing developers. The client component contains the Eclipse IDE, Parallel Tools Platform (PTP), and client code for the IBM High Performance Computing (HPC) Toolkit. The server component contains instrumentation libraries and tools for the IBM HPC Toolkit and X11-based GUI tools that can be used, if necessary, in place of the client-side IBM HPC Toolkit plug-in. 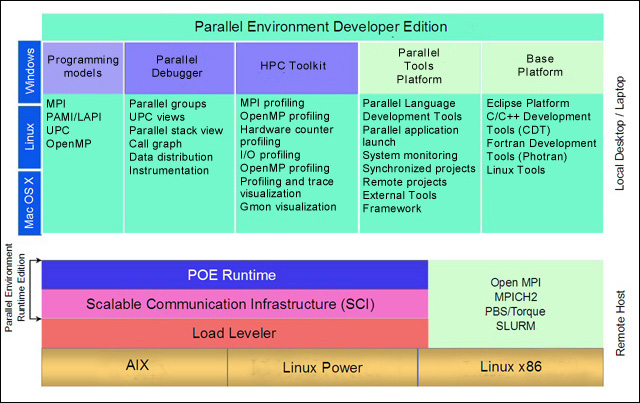 The workbench component contains an industry standard, innovative workbench client IDE for enhancing the productivity of high performance and technical computing programmers. The server component contains the IBM High Performance Computing (HPC) Toolkit, which is used to analyze and tune the performance of application programs. It also contains Scalable Communication Infrastructure (SCI), which is a communication library and run time for a tools developer to use as infrastructure in developing scalable tools.

On Linux, the names of the RPM Package Managers change to reflect a single RPM for each platform. Considering that, when upgrading software, the current RPMs must be removed and then the new RPMs are installed. There is no impact on the migration. On IBM AIX®, the name of the packages does not change; so, there is no impact on this platform. IBM PE Developer Edition supports only a homogeneous environment, where all the nodes in the cluster are using the same level of IBM PE Developer Edition.

IBM PE Developer Edition combines a number of tools to provide a complete development environment for high performance and technical computing. These tools support features that enable developers to perform the complete range of programming tasks, such as editing, compiling, running, and debugging serial and parallel applications. Supporting these features directly within the workbench results in improved developer productivity.

Developers can use the following standard Eclipse features:

Developers can use the following PTP features:

The workbench component contains an industry standard, innovative workbench client IDE for enhancing the productivity of high performance and technical computing programmers. The server component contains the IBM High Performance Computing (HPC) Toolkit, which is used to analyze and tune the performance of application programs. It also contains Scalable Communication Infrastructure (SCI), which is a communication library and run time for a tools developer to use as infrastructure in developing scalable tools

This Solution Guide mainly focuses on synchronized projects to demonstrate the flexibility of the IBM PE Developer Edition tools. Furthermore, for C/C++ and Fortran projects, you can use two build types:

The performance analysis tools that are integrated with the IDE help developers locate performance problems in their application code, including tools to analyze processor resource usage, MPI profiling and tracing, OpenMP profiling, and I/O profiling. These performance management tools might improve systems availability. Performance management tools allow you to optimize the use of computing resources, thereby protecting those investments. The performance tools that are provided by IBM PE Developer Edition can help you understand the utilization of system resources concurrently so you can balance your workloads or tune programs. By maximizing system resource utilization, you can optimize your system and network performance.

The Eclipse framework provides the foundation for the IBM PE Developer Edition. Eclipse is a technology platform that was originally an IDE. Today, Eclipse is used as the foundation for many different types of tools. Eclipse is also an Open Source Project. The Eclipse Public License is Open Source Initiative (OSI) certified. The Eclipse community is also an important part of the platform, and there are hundreds of companies and thousands of programmers working to improve and extend Eclipse all the time.

Figure 2 shows a high-level architectural view of Eclipse. You can develop stand-alone Rich Client Platform (RCP) applications. You can also use many different development tools, such as the C/C++ Development Tooling that extend the Eclipse platform, and you can also develop additional plug-ins using the Plug-in Development Environment (PDE). 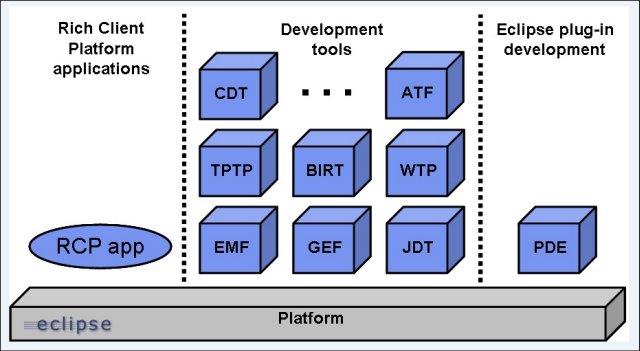 Figure 3 shows core components of the Eclipse platform, such as the workbench, help system, and team components. 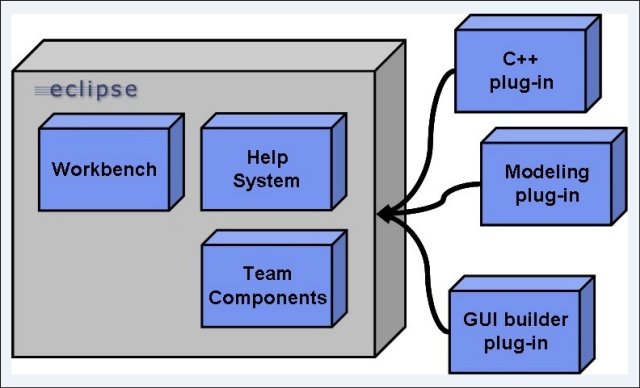 Here are some key concepts and definitions of Eclipse:

POE is used to set up the environment for the user’s parallel program and to control and monitor job execution. You can use the resource manager of your choice for submitting and managing batch or interactive parallel jobs. IBM PE Runtime Edition includes a set of resource management interfaces and data areas for configuring your resource manager to interact with POE. Integration with IBM Tivoli® Workload Scheduler LoadLeveler: IBM PE Runtime Edition allows users to run POE jobs in interactive or batch mode with LoadLeveler managing the node, network, processor, memory, and other key resources for optimum throughput and resource utilization.

The IBM MPI is a complete MPI 2.2 implementation that is designed to comply with the requirements of the MPI standard. IBM MPI supports the MPI 2.1 process creation and management scheme. The IBM design is enabled by using static resources that are allocated at job start time. The IBM MPI provides many non-blocking collective communications subroutines that are available for parallel programming. These subroutines are extensions of the MPI standard. Collective communications routines for 64-bit programs were enhanced to use shared memory for better performance. The IBM MPI collective communication is designed to use an optimized communication algorithm according to job and data size. The IBM MPI provides a high scalability and low memory usage implementation. The IBM MPI library minimizes its own memory usage so that an application program can use as much system resources as possible. It is designed to support parallel job size of up to one million tasks. IBM MPI runs over PAMI. This is achieved through using the PAMI APIs. For Linux, PE Runtime Edition also includes an MPICH2 MPI implementation that can be used as an alternative to the IBM MPI implementation.

The low-level application programming interface (LAPI) is a message-passing API that provides a one-sided communication model. In this model, one task initiates a communication operation to a second task. The completion of the communication does not require the second task to take complementary action. The LAPI library provides basic operations to “put” data to and “get” data from one or more virtual addresses of a remote task. LAPI also provides an active message infrastructure. With active messaging, programmers can install a set of handlers that are called and run in the address space of a target task on behalf of the task that originates the active message. Among other uses, these handlers can be used to determine dynamically the target address (or addresses) where data from the originating task must be stored. You can use this generic interface to customize LAPI functions for your environment. LAPI is meant to be used by programming libraries and by power programmers for whom performance is more important than code portability. MPI and LAPI provide communications between parallel tasks, enabling application programs to be parallelized. MPI provides message passing capabilities that enable parallel tasks to communicate data and coordinate execution. The message passing routines call communication subsystem library routines to handle communication among the processor nodes. LAPI differs from MPI in that it is based on an active message style mechanism that provides a one-sided communications model in which one process initiates an operation and the completion of that operation does not require any other process to take a complementary action. LAPI is also the common transport layer for MPI and is packaged as part of the AIX RSCT component.

The parallel debugger (pdb) streamlines debugging of parallel applications, presenting the user with a single command-line interface (CLI) that supports most dbx/gdb execution control commands and provides the ability to examine running tasks. To simplify management of large numbers of tasks, dbx/gdb allows tasks to be grouped so that the user can examine any subset of the debugged tasks. The pdb allows users to start a POE job or attach to a running POE job and place it under debug control. It starts a remote dbx/gdb session for each task of the POE job that is put under debugger control.

IBM Parallel Environment Developer Edition is an Eclipse-based integrated set of application development tools that help you develop, debug, and tune your parallel applications. It includes a set of standard Eclipse components and additional support for IBM environments. The IBM PE Developer Edition also includes the IBM HPC Toolkit (HPCT), which is a collection of tools that you can use to analyze the performance of parallel and serial applications, which are written in C or Fortran, that are running the AIX or Linux operating systems on IBM Power Systems servers. Applications running on Red Hat Enterprise Linux 6 on IBM System x servers with the Intel microarchitecture codename Nehalem, Westmere, and Sandy Bridge family of processors are also supported. The Xprof GUI also supports C++ applications.

The Parallel Tools Platform (PTP) is an Eclipse-based application development environment that contains an integrated set of tools to help you edit, compile, run, debug, and analyze your parallel application that is written in C, C++, and Fortran. Advanced tools that are included with PTP include static analysis tools to locate errors before the code is compiled, refactoring tools to modify code while preserving behavior, and an integrated parallel debugger. PTP supports a broad range of architectures and job schedulers and provides the ability to easily add support for additional systems. The C/C++ Development Tooling provides a fully functional C and C++ IDE based on the Eclipse platform. Photran is an IDE and refactoring tool for Fortran based on Eclipse and the C/C++ Development Tooling.

These tools perform the following functions:

IBM PE Developer Edition provides features that augment the C/C++ Eclipse editor for ease of using PAMI and LAPI APIs, locating them in the source code, getting information about API usage and arguments, and so on. IBM PE Developer Edition provides a source-linked view of items that are identified by the IBM XLC/XLF Compiler Transformation reports.

The software requirements for the IBM PE Developer Edition server component are one of the following items:

The workbench component uses one of the following operating systems:

The software requirements for the IBM PE Developer Edition client component are one of the following operating systems:

Note: For supported levels, compatibility, and limitations regarding adapter and switch support, see the readme file that is located under documentation and IBM High Performance Computing Clusters Service Packs sections at https://www.ibm.com/developerworks/wikis/display/hpccentral/HPC+Central.

Ordering information is shown in Table 1.

The following publications are available from the web:

To access the above documentation, see the IBM Cluster Information Center website. This website contains the most recent documentation in PDF and HTML formats and is at http://publib.boulder.ibm.com/infocenter/clresctr/vxrx/index.jsp.