Applying grid technology to business IT infrastructures represents an evolution of the virtualization, integration, and support of industry standards that IBM® has long been applying to solve customers' business problems. Grid computing allows a set of disparate computers in an organization to function as one large, integrated computing system. That single system can then be used on problems and processes that are too large and intensive for any single computer to easily handle alone efficiently. Additionally, a grid provides processing capacity redundancy in support of high availability objectives, so that if one machine in the grid is offline, work is assigned to another machine.

Applying grid technology to business IT infrastructures represents an exciting evolution of the virtualization, integration, and support of industry standards that IBM® has long been applying to solve customers' business problems. Grid computing allows a set of disparate computers in an organization to function as one large, integrated computing system. That single system can then be used on problems and processes that are too large and intensive for any single computer to easily handle alone efficiently. Figure 1 illustrates an abstract view of a grid deployment. Additionally, a grid provides processing capacity redundancy in support of high availability objectives, so that if one machine in the grid is offline, work is assigned to another machine.

The parallel engine of IBM InfoSphere® Information Server enables IBM InfoSphere DataStage®, QualityStage®, and Information Analyzer jobs to run in parallel on either a single symmetric multiprocessor (SMP) server or on multiple servers in a clustered environment. In both cases, a simple configuration file that is supplied at run time defines the degree of parallelism and the corresponding servers or machines to be used by a job. To change the degree of parallelism, or the servers on which a job runs, you must supply a configuration file with the new number of nodes and its associated servers.

To optimize the value of a grid, IBM Lab Services offers the Grid Enablement Toolkit to work with InfoSphere Information Server and resource manager software to dynamically build these configuration files based on the machine reservations that are available. This solution guide explores running InfoSphere Information Server in a grid environment and provides an overview of the Grid Enablement Toolkit.

Many of the largest InfoSphere Information Server deployments now run on a grid configuration. Some organizations turned to grid because they needed to scale the number of applications to keep up with various business demands. They are now running tens of thousands of applications each day on a grid. Others organizations needed to scale the volume of data they could process in a cost effective manner. They are now processing terabytes per hour on a cluster of 4, 8, or 12 core machines.

The benefits of grid computing go far beyond power and speed by delivering the following important characteristics:

The InfoSphere Information Server grid solution has several components that administrators and developers interact with. But first, you must understand the terminology behind the solution.

The following terms are used in this document within the context of grid computing with the InfoSphere Information Server:

Organizations that are already familiar with InfoSphere Information Server will find that the primary touchpoints for job submission are the same. Jobs can be submitted to the grid through the Operations Console or Director clients, or they can be submitted by using the dsjob application programming interface (API). After the job is submitted, the solution affects the changes that are required to use the power of the grid.

The grid implementation works as explained in the following process and as illustrated in Figure 2: 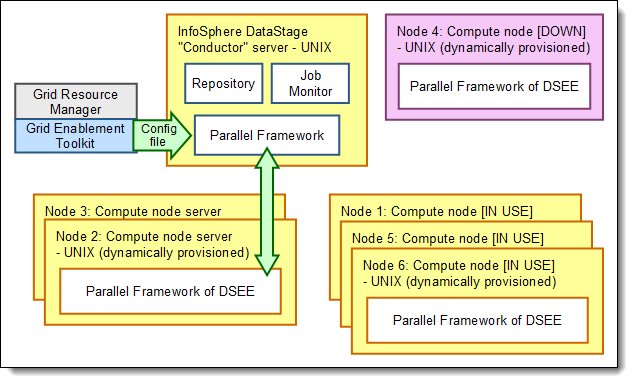 Setting up your InfoSphere Information Server grid computing environment entails the steps that are outlined in Figure 3. 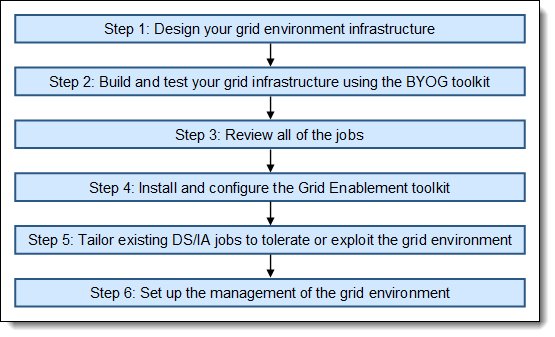 After choosing to implement a grid environment as a solution to your business requirements, decide on the following elements of the grid infrastructure:

Step 2: Building and testing your grid infrastructure by using the BYOG toolkit

The Build Your Own Grid (BYOG) toolkit is a set of scripts and templates that are delivered by IBM Lab Services. The BYOG toolkit helps you to configure a Red Hat or SUSE Linux Grid environment. It provides the necessary tools to build the head node and the compute nodes without system administration on each compute node.

Your existing InfoSphere Information Server has a number of InfoSphere DataStage, QualityStage, and Information Analyzer jobs. Identifying and understanding which jobs will be migrated from an existing environment to the grid helps define the grid configuration limits:

The Grid Enablement Toolkit that is provided modifies the InfoSphere Information Server components to enable the creation of a dynamic configuration file. You must install and configure this toolkit by using the IBM Lab Services engagement to set up your grid environment.

Step 5: Tailoring existing jobs to use the grid environment

Although most of the configuration is done on the environment, you are likely to have a set of jobs for which you want to take a specific set of capacity at run time that is different than the default set. In those cases, you need to override at the job or sequencer level the resource quantity to be requested of the Resource Manager. The grid toolkit defines two new environment variables that allow the user to make job-specific requests:

Step 6: Setting up the management of the grid environment

Setting up the management of the grid environment entails the following tasks:

The following sections provide more details about several of the topics described in the previous steps.

The head node must be able to accommodate messages from all concurrently submitted jobs. Data is moved between the various nodes based on job partitioning requirements by the Parallel Framework components using TCP/IP (ports ≥ 11,000). The ports in the 10,000 range are used for conductor-to-section-leader communication. The topology of the network with 1-Gb switches must be managed to isolate jobs to a gigabit switch whenever possible.

NAS configuration is the recommended solution over SAN for grid implementations for the following reasons:

Large amounts of data and messages are moved between the head node and the compute nodes, which can place significant bandwidth demands on the gigabit switches. A separate private network is recommended for this data movement by using multiple NICs for public and private network connections. This network is applicable to SAN-configured grid environments. 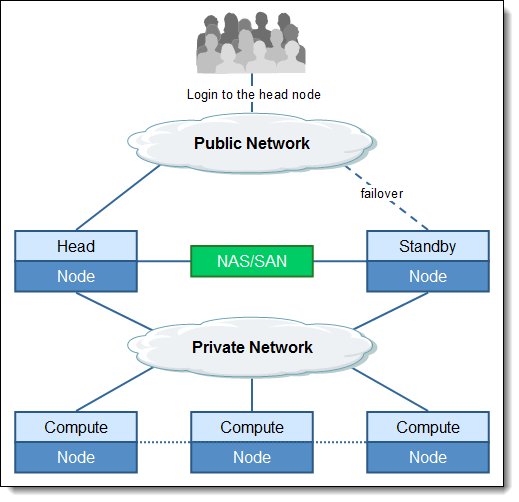 An HA grid environment has the following considerations:

IBM offers and recommends IBM Platform Symphony as the resource manager in the Information Server grid solution. Some customers have worked with IBM Lab Services to customize a solution that uses other resource manager software, including IBM LoadLeveler, Oracle Grid Engine, and DataSynapse GridServer.

The resource manager can be used to manage project workloads by using queues. The queues provide the following management capabilities:

The options of a particular resource manager determine the specific management capabilities. For more information, see the relevant product documentation as listed in "Related information." For a description of the grid solution and more configuration details, see the IBM Redbooks® publication Deploying a Grid Solution with the IBM InfoSphere Information Server, SG24-7625.

InfoSphere Information Server offers a collection of product modules and components that work together to achieve business objectives within the information integration domain. The product modules provide business and technical functionality throughout the entire initiative from planning through design to implementation and reporting phases.

InfoSphere Information Server tiers are available on the following platforms:

IBM InfoSphere Information Server is available only through IBM Passport Advantage®. It is not available as a shrink wrapped product.

On this page, enter InfoSphere Information Server, select the information type, and then click Search. On the next page, narrow your search results by geography and language.