IBM® ISPF Productivity Tool for z/OS®, V7.1, operates as a seamlessly integrated front end to ISPF for z/OS to provide productivity aids to system programmers and application programmers. It can save keystrokes, time, and effort for anyone who uses ISPF.

IBM® ISPF Productivity Tool for z/OS® is an ISPF application that provides significant productivity improvements and time savings to ISPF users on IBM z/OS systems. ISPF Productivity Tool operates as an integrated front end to ISPF, and it enhances and extends ISPF capabilities. This tool also delivers new batch and online functions to manipulate partitioned and sequential data set directories, and it improves performance for copy and compress operations for partitioned data sets. ISPF Productivity Tool is a productivity aid to systems and applications programmers because of the various functions it provides. For example, it includes shortcuts, navigational aids, automatic PDS compression and directory expansion, and search capabilities for volumes, data sets, members, and text within members.

Many IBM z/OS users have experience in working with ISPF and know how to quickly navigate the panels, but other users who are new to the IBM System z® environment, were trained in workstation GUI tools and interfaces. Between these groups of users, one common trait is that, when they work in ISPF, they are looking for tools that offer time-saving advantages, which they now have with IBM ISPF Productivity Tool for z/OS. ISPF Productivity Tool for z/OS increases the productivity of existing ISPF users and attracts new users by enabling them to become efficient quickly. ISPF Productivity Tool boosts productivity for all users, including developers, system programmers, technical support, and operations and control personnel.

IBM ISPF Productivity Tool combines a range of ISPF utilities and new functions with the standard ISPF functions, such as Browse, Edit, and View. It provides extensive search capabilities and provides drill down capabilities to locate volumes and data sets with extended functions at all levels. Programmers access these extended features by entering commands on the command line or in the selection field for a particular data set or member. They can also use hotbars, field-sensitive areas, and point-and-shoot techniques. Extensive help is available by using a simple command from any panel.

The functions of the ISPF Productivity Tool are added to a user's session through an update of the Time Sharing Option (TSO) logon procedure. These functions enhance productivity through many commands, utilities, and navigational features for commonly used activities. System and application programmers can save a substantial amount of navigation time and can get their work done more efficiently.

ISPF Productivity Tool is integrated into almost every aspect of ISPF to provide numerous productivity aids and shortcuts. For example, when viewing the output from a job, you want to open a data set that you see in the output. You can enter a command, such as the edit (ed) command. Then, you point your cursor to the data set name and press Enter (Figure 2) to open the file for edit.

Figure 2. Pointing to a data set name in a point-and-shoot text field to open the file for edit

Another shortcut is opening a file for edit. You can enter the edit command (ed) by using a pattern to list all data sets that match the pattern and then select a file in the resulting list (Figure 3).

Figure 3. Shortcut for selecting a file for edit

If you have seen the “No space in directory” message when adding members to a partitioned data set (PDS), you might recall the number of panels and keystrokes that ISPF requires when allocating a new PDS, copying the members, and renaming the data set. With ISPF Productivity Tool, you see a confirmation window to expand the PDS directory (Figure 4). When you press Enter, the PDS directory is expanded, without leaving the edit session of your PDS member.

Figure 4. Expanding a directory when needed

For organizational aids, ISPF Productivity Tool introduces the concept of an object list (OLIST). An object list is a data store reference that is used to organize all of the required resources for a project into a single project folder called an OLIST. An OLIST is a list of files and objects that can include the following items and more:

Many commands are available in ISPF Productivity Tool to work with OLISTs. These commands introduce a various ways to use OLISTs. For example, you can create a temporary OLIST that contains all the files that are allocated to your TSO session. Another example is creating a temporary OLIST of authorized libraries (by the authorized program facility (APF)) and using the VALIDATE function to ensure that the list is current. Alternatively, you can create an OLIST of all files that begin with "IMS" but that do not contain the characters "test." Then you can perform some action on the files as a group, for example recall or delete.

After you have your OLIST, you can go through the processes one step at a time by selecting and acting on the files in the list. From the same OLIST, you can also perform such actions as edit, browse, view, copy, rename, allocate, compress, empty, submit, print, and recall. An OLIST is created with a simple command. For example, the ol dnet187.adlab.* command creates an OLIST similar to the example in Figure 6 with all the data set names that match that pattern.

From the list, you can select an object to perform the default action (in this case edit). Alternatively, you can enter a command, such the browse command (B) on the member command line. You can also change the default action. In this example, the list contains VSAM files, which you can open automatically in File Manager if it is installed on the system.

A member selection list is displayed when you select a PDS or PDSE from an OLIST (Figure 7).

By using a member selection list, you can perform various tasks on the list. For example, you can use filters to select members in the list, use global find and change commands to locate or change data in several or all members of a PDS or PDSE, and perform global edits.

This scenario involves an activity that frequently occurs for a development center programmer. The organization's asset manager has several large Microsoft Excel spreadsheets that include such details as assets, contacts, orders, shipments, and deliveries. The asset manager updates and manipulates the spreadsheets to attempt reconciliations. Because the senior auditors were unable to manipulate large volumes by using LOOKUPs VLOOKUPs, they asked the development center programmer for assistance with the complicated cross-matching of data. This request became a periodic on-demand task for this programmer.

Because this programmer is adept in REXX and has a large processor, the programmer saves and uploads the spreadsheets as comma-separated value (CSV) files and processes them by using compiled REXX programs. Although the file formats, content, and requirements change each time, the activity is similar each time that it is requested. The spreadsheets to be matched (two, three, or sometimes up to six) are sent to the programmer, who uploads them to the host. A new REXX exec is then tailored based on previous examples. Then it is compiled and tested, and any required modifications are applied. The results from the match are downloaded to the PC and then sent by email to the auditors.

Figure 8. Permanent OLIST of the objects used in the project

Now that the process is in place, the asset manager sends the file as an IBM Notes attachment. The following list summarizes the tasks that the programmer completes on the host to process the files:

During the development cycle of a software release, the developer needs to needs to recreate the production environment for testing. This process involves copying many data sets from the production environment to the test environment. Although the developer can use the IEBCOPY utility, the developer recognizes that, over time, unnecessary members were added to the data set and should not be carried forward into the test environment. Fortunately, the ISPF Productivity Tool Batch Utility (IQIBUTIL) extends the IEBCOPY capabilites, allowing a user to copy and replace only selected members of a particular data set. The member name pattern mask support of the utility supports two member name pattern characters:

With this support, the user can selectively process members in copy and move operations, reducing the steps required to complete this process.

Figure 9 shows the JCL and utility statements to copy one of the data sets to the test environment.

Figure 9. JCL and utility statements to copy one of the data sets to the test environment

In this example, all members with names that begin with ABC, except for members ABC12345 and ABCDUMMY, are copied from the input library, specified by the INDSN parameter to the output library, specified by the OUTDSN parameter. To ensure the data sets in the test environment are kept separate from production, all member names that match the filtering criteria are renamed in the output library, with an X in the first character and a Y in the third character of their original names. The input data set is dynamically allocated with a disposition SHR. The output data set is dynamically allocated with a disposition OLD. The data set disposition is specified in the EXEC parameters. The names of all copied members are reported in the SYSPRINT output data set.

After the test cycle is complete, the development team needs to move the source code for the new release from the test data sets into the production data sets (Figure 10). 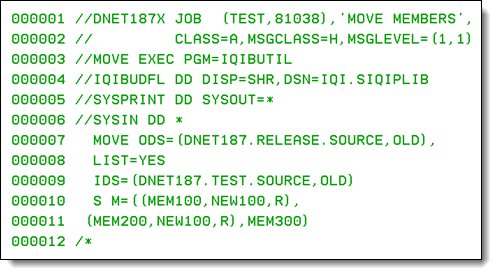 Figure 10. Moving the source code for the new release from the test data sets to the production data sets

As part of the process, the test data sets must be prepared for the test cycle of the next release by deleting the tested members. The move function is not available in the IEBCOPY utility but is supported by the ISPF Productivity Tool Batch Utility. Therefore, the developer uses the utility to move the data set members. Using a move operation instead of a copy eliminates the additional cleanup steps that are required to delete members.

Three members of the source PDS, specified by the IDS keyword, are copied into the target PDS that is specified by the ODS keyword. The same three members are then deleted from the input data set. Both data sets are dynamically allocated when the job is executed. To ensure that the target data set is in the proper state for the move, the utility checks whether member MEM300 is already present in the output data set. If it is present, return code 4 is generated by the MOVE operation, and none of the selected members are deleted.

By using the ISPF Productivity Tool customization wizard, you can define the CLIST that is used by the various products. Then, you can access the following files directly from an OLIST:

ISPF Productivity Tool is also a valuable tool for users who are adopting IBM Rational® Developer for System z. Often, much of a programmer's time is consumed not by actual programming, but by keeping track of data sets, libraries, and members that they work with on a daily or hour-by-hour basis. For these highly specific tasks, users can use the Rational Developer for System z Host Connection Emulator to perform the following tasks: