IBM Wave for z/VM: An Introduction

IBM® Wave is a z/VM® hypervisor manager product that was acquired when IBM acquired CSI International. This product provides a graphical interface tool that simplifies management and administration of z/VM and Linux environments on IBM System z®. The scope of IBM Wave can span multiple logical partitions (LPARs), SSI clusters, and servers. This IBM Redbooks® Solution Guide provides an overview of IBM Wave for z/VM.

IBM Wave provides a visualization format that represents virtual resources and their relationships. It provides a customizable graphical (Figure 1) or tabular view that helps administrators understand the status of the entire system or a subset (such as system, network, or storage topology) in a single view. The status of servers, networks and network devices, and storage is detected automatically by IBM Wave. Changes in resources and their relationships are monitored and reflected in displays. Many of the IBM Wave displays have advanced filters, tagging, layout, and layer selection to provide customized views. 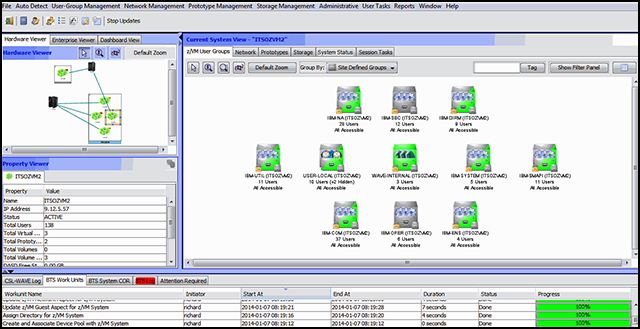 IBM Wave provides a rich GUI work environment with graphical views of all managed objects. The entire server farm can be viewed, including systems in SSI clusters and stand-alone LPARs. IBM Wave allows running of customized REXX EXECs as part of the cloning process. Linux shell scripts or REXX EXECs can be run against one or more systems, with the results of each displayed in the GUI.

IBM Wave allows for enhanced server farm administration. Using the GUI, virtual processors, memory, and other guest properties can be easily changed. Point and click and drag actions can be used to transfer guests between projects, groups, and account codes, and start Live Guest Relocation (LGR). Intelligent Active Notes (IANs) is a feature that can be used to attach special notes to any object. The notes can trigger automatic warnings that are based on a correlation between the IBM Wave action that is attempted and the text in the note.

The main value proposition is the complete abstraction of the z/VM environment so that it is hidden from the Linux system administrator. IBM Wave allows for simplification technology that is geared towards automation and effortless management of even the most complex and large virtual server farm environments. This simplification allows the z/VM System Programming team to devote time to the important tasks of managing z/VM capacity and tuning. The IBM Wave user rarely needs to leave the GUI client for infrastructure activities, which reduces the amount time the user needs to use the 3270 "green screen" interface.

Multiple objects can be affected in a single action. Actions can be carried out against any number of selected objects. In native z/VM, these actions require separate commands to be run to start or stop a group of servers. In some cases, multiple systems commands must be run to complete a single action. Operating in native z/VM requires strong z/VM skills. IBM Wave GUI provides a more intuitive and easy to operate facility to manage servers in both single or multiple LPARs and the entire enterprise.

The z/VM interface is built on the standard 3270 green screen interface. Before IBM Wave, retrieving any information from the z/VM system could be done only by running commands and viewing the results on the 3270 interface. IBM Wave provides the user with a "single glance" technology that is based on smart ICONs and standard color usage. A graphical presentation of system topology greatly enhances the user’s ability to detect anomalies.

System status monitoring to determine when attention is required is not directly supported in z/VM. The performance toolkit can be used to monitor system performance and get textual alerts at the system console. If a Linux on System z guest loses its IP connection, z/VM does not provide easy to recognize alerts. IBM Wave, however, displays views showing the usage of all resources in a dashboard format. It provides a table of anomalies that are detected across the system. The dashboards can be combined for all managed z/VMs on the enterprise for an overall aggregate view of the entire data center.

The management of complex environments that include multiple z/VM LPARs sharing directories in SSI clusters or as stand-alone z/VM environments require highly skilled z/VM system programmers. That need is lessened with the usage of IBM Wave because a single such instance can manage an unlimited number of central processor complexes (CPCs) and z/VM LPARs, which creates a central point for both management and monitoring.

The GUI allows all necessary procedures and functions that are needed to carry out routine management and provisioning tasks and special operations. Figure 2 highlights the various features.

Figure 2. Description of the IBM Wave for z/VM GUI

The main objective of IBM Wave is to eliminate the learning curve that is needed to control the z/VM environment. Its graphical environment presents the System z architecture and z/VM infrastructure in a way so that the Linux administrators can manage their servers with the same skill set. Day to day operations and even large-scale virtual hardware and system configuration changes can be done without the help of the z/VM system programmers.

Figure 3 shows a picture of the application architecture. 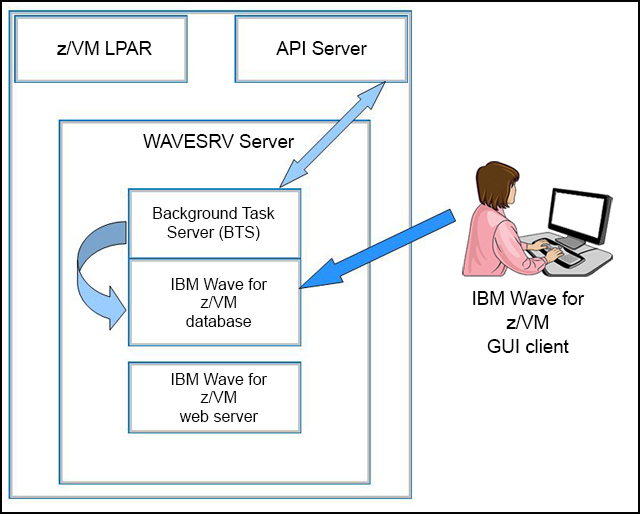 The interactions between these components in the three-tier architecture facilitate all of the IBM Wave for z/VM features.

One example of a usage scenario is "powering on" a new z/VM guest. After you create a new z/VM guest, the guest must be activated so that it can be used. Use the Activate action to activate all z/VM Guests inside a group. This process is analogous to powering on a physical server. You can do this action by right-clicking the icon that represents your guest and selecting Activate (see Figure 4). 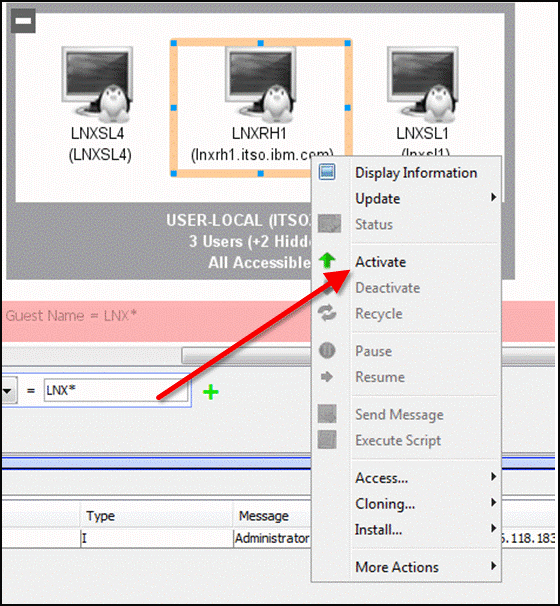 Multiple guests can be activated simultaneously by highlighting more than one icon before you right-click and select Activate. Conversely, you can use the Deactivate action to deactivate all z/VM Guests inside a group.

Here at the z/VM prerequisites for the TVP for IBM Wave for z/VM :

For every workstation running the IBM Wave for z/VM graphical user interface (GUI) client, the following items must be considered:

Here are the prerequisites for the WAVESRV Linux guest:

For every Linux on System z virtual machine that managed by IBM Wave for z/VM, the SSH, VMCP, and CMSFS (if you use SUSE Linux Enterprise Server) packages must be installed.

Ordering information is show in Table 1.

Table 1. Ordering part numbers and feature codes
Customers can order through Shop z, which can be found at https://www14.software.ibm.com/webapp/ShopzSeries/ShopzSeries.jsp.